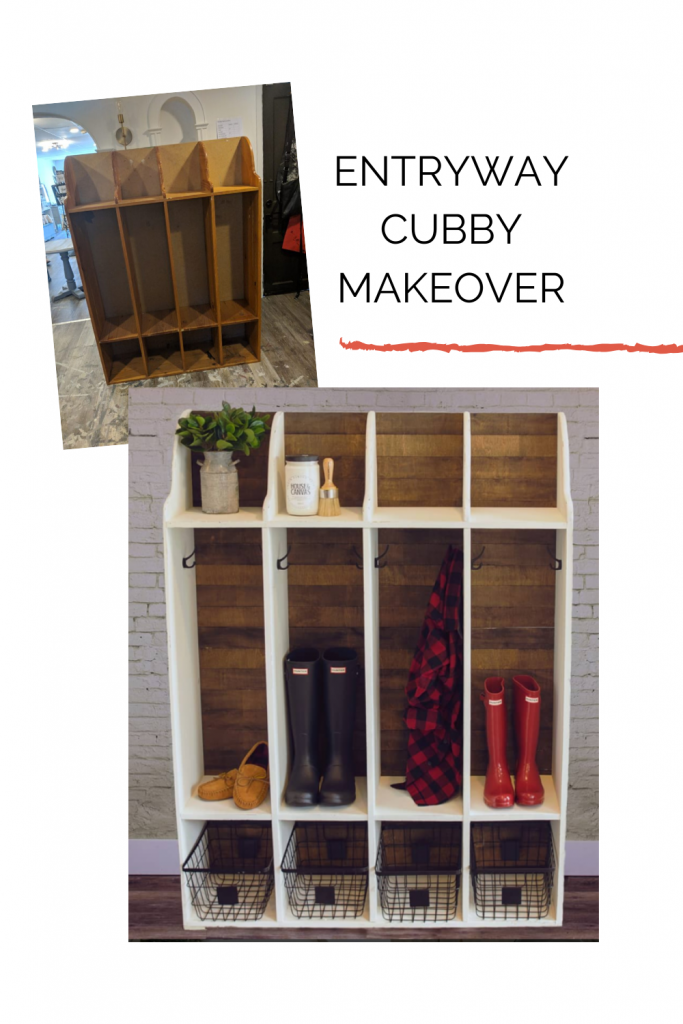 A while back I was invited to participate in an upcycle challenge hosted by the Toronto Home Show in support of Habitat for Humanity. The theme was “Entryway Envy” and I was challenged to find a piece of furniture at my local ReStore and fix it up to be auctioned off at the Toronto Home Show where all proceeds were in support of the charity. I popped into the Etobicoke location just outside of Toronto and found this awesome piece!!

Is this not the COOLEST piece ever?!?!?! It was definitely hand-made and had seen a lot of love!! I have no idea what it was used for? There were no hooks or even holes from old hook. Maybe it was a bookshelf? I could picture it being an old Kindergarten cubby, but who knows!! I enjoy the mystery of its story :)You can see up close that this piece was well loved!

To get started, I removed the back panel. It was just a piece of particle board screwed into place. It was easy to remove with my power drill.

Next, I used some good ol’ Poly Filla filler to fill up any holes and the bigger scratches and dents. This stuff dries super quick! Once it was dry, I sanded it down until the surface was nice and smooth.

I decided to paint this piece white. Yes, a wee bit boring, but because this piece was going to be auctioned off for charity, I wanted it to appeal to the masses, so I figured going with a neutral colour was best.I painted the cubby with two coats of House&Canvas Furnitue Paint in Angora. It’s the perfect white to match any decor. Once the paint was dry, I distressed the edges with 180 grit sandpaper and gave it 2 coats of House and Canvas Wax Top Coat for supreme durability.Â Once the cubby was painted, I need to decide what I was going to do with the back panel. Needing some inspiration, I took a trip to my local ReStore. The Restore is filled with goodies just waiting for a new home and I knew I would find something there to utilize. While at the Restore, I came across a few materials I thought about using and decided to bring home a roll of a cool black and white patterned wallpaper. I planned on wrapping the original back panel with it.

But, once I got back to my workshop and took out my new wallpaper, I held it up to the cubby and realized it was a strong NO. It didnâ€™t match the unit and just looked overall ugly, so I put the wallpaper in my pile of stuff-to-use-another-day. Still gung-ho on the wallpaper idea, I asked around my DIYer friends if anyone had scrap wallpaper. I was on a budget, so freebies were my only option!! One of my girlfriends just renovated her home and had some leftover faux barn board wallpaper she used as a feature wall in her bedroom. She was so kind to give me her leftovers.  I mixed up some wallpaper paste, and gave the old wall panels a good coat of adhesive.  Then I layed the wallpaper and let it dry.

Yes, it looks super cool from afar, but it was a huge fail once again! It looked horrible! First, I’m a dummy and hung the paper upside down. Normally it wouldn’t matter, but this paper had drip marks to add to itâ’s rustic look, so my drip marks were upside down and defying gravity. Plus, the paper was quite thick, so the corners were bunching and looked horrible. AND, the paper was not interested in sticking to particleboard. At this point, I’m putting the wallpaper idea to rest. I’m totally fine with silly disasters like this. Mistakes are made for learning and as a DIY’er I’m certainly used to making mistakes! But never give up!I I remembered seeing this awesome wood plank wall at the Restore in Etobicoke that I was totally inspired by it at the time. I remembered I had snapped a pic not knowing where ‘d ever use the idea, but I loved it!!

Inspired by this plank wall, I decided to replicate it on the back of my cubby. Still staying on a budget, I went shopping in my Dad’s workshop! seriously the best place ever. The man hasn’t thrown out a single piece of wood in 50 years. I was finally feeling confident again!

I found enough odds and ends to cut plenty of 2.5″‘ x 44″ planks to cover the back of the cubby. I took the planks home and stained them in my favorite Mixwax Jacobean wood stains. Just one coat was needed.

Attaching the planks was super easy. I layed the cubby on it’s front, positioned the planks where I wanted them, and used my nail gun to nail them in place. That’s it! Super easy!!

This was by far one of my most favorite pieces ever upcycled! I thoroughly enjoyed the process. From shopping at the ReStore to shopping in my Dad’s garage! From crazy fails to a masterpiece! It was a journey! But well worth it In the end, I won the Upcycle Challenge and my piece earned a huge check for the charity! WIN WIN. (But I am secretly jealous of the entryway or mudroom this piece ended up in… it was awesome!)

How To Create Blog Posts That Get Published

Thrifting 101: How To Paint A Side Table

How To Paint Grain Sack Stripes

How To Paint A Thrifted Fabric Chair