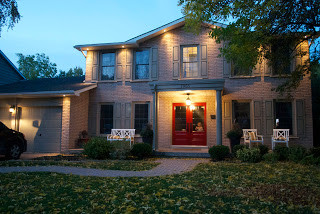 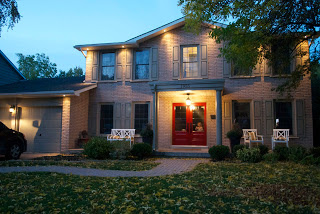 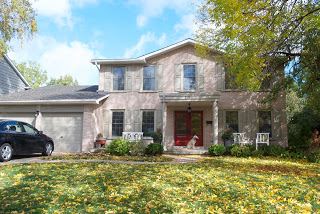 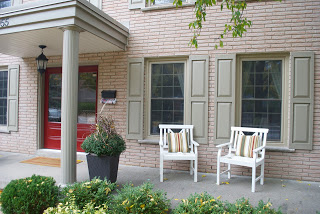 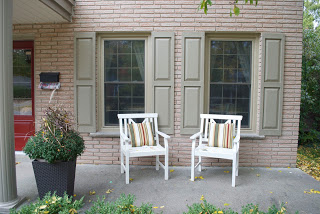 Yea, I kinda still wish I painted my brick.  But after living in the neighbourhood for a bit, I realized that my house would stick out like a sore thumb with painted brick.  NO ONE paints their brick houses around here.  And it would have been so hard to pick out the perfect colour.  It could have easily gone wrong, really wrong.  I had a painter come out, and once he realized I wanted to paint my brick, he never even called me back with a quote!!  So, okay fine!  I have to work with what I got.  Pink brick.

The red door really does compliment the brick, and I don’t regret getting it.  But, I am a little pissy about the roof I got.  It’s too gray.  When you are picking from a 2″ swatch, you kinda have to just cross your fingers.  Big mistake.  I should have taken my time and gone around the neighbourhood and studied the roofs more.  Lesson learned.

I really struggled with what colour to do the shutters, portico and garage.  Brown, Black, Gray…. I was not interested in having the new shutters custom painted.  It would have cost a fortune, so I had slim pickings as far as standard shutter colours.  I had this designer guy come to my house to talk about front doors, and he suggested just painting everything the same colour as the window casing and having it all blend in nice.  Then let my fabulous ( and ridiculously expensive) front door POP.  He was right….  don’t go all ‘designer-chic-bananas’ and just keep it simple.  So I did.  Standard Taupe all around!!

You know what, I do like the outcome.  I worked with what I had and I think the house looks up to date and loved.  It’s just, if you look at the other rooms I have done (like the office, and toy room), I clearly love WOW rooms.  I was hoping to have that on the exterior as well, but through this process I have learned that sometimes neutral is best.  Let the space speak for itself.

Anyway, I hope you like what I have done.  And if you don’t, lie, and tell Ryan you do because he forked over a lot of dough for me.  He loves me.  Right, honey xoxo

And come spring, I’ve got a lot of landscaping to do… I’m tired just thinking about it.